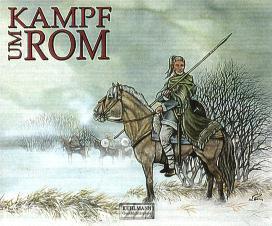 Rome was captured nine times. Innumerable natural catastrophe,  and an avalanche of barbarian invasions accompanied the collapse  of classical civilization. This epoch lasted almost six centuries and from it emerged a new Europe, one that in many ways  endures to this day.
BATTLE FOR ROME consists of two games by different designers  each of whom presents his own treatment of the period of  barbarian invasions.

In Hartmut Witt's game players take the part of the Romans, Elbe-Germans, East Germans and Rhine-Weser Germans and attempt to build a many-faceted civilization by acquiring cards representing a variety of other peoples and their cultures. A player gains cards by seizing map areas occupied by enemy units, by destroying enemy capitals, by assimilating enemy units and by trading with other players.

In Gerhard H. Kuhlmann's game the nations active in the game are  randomly distributed among the players at the beginning of play,  Running straight across the game map is the cultural divide between the developed lands of ancient civilization and the  barbarian regions. Everyone is pressing towards Rome. It is  incumbent on the individual players to develop as many cultural advances as possible.

In both games players attempt to manipulate invaders and catastrophes so that more damage is done to their opponents
units than their own.

The game box contains:
1 game board with a map of central and western Europe during the period of barbarian migrations
52 cards representing the peoples inhabiting and invading Europe during the migrations and 8 catastrophe cards
120 wooden game tokens with color illustrations of Romans and
Germans
1 pad of "Cultural Progress" charts
Game rules


Have a look at the game board

Back to the main menue